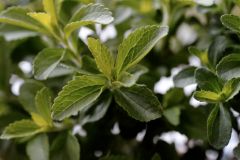 Stevia is a sweetener and sugar substitute extracted from the leaves of Stevia rebaudiana, a plant that has been used for more than 1,500 years by the Guaraní peoples of South America. The leaves have been traditionally used for hundreds of years in both Brazil and Paraguay to sweeten local teas and medicines.

the active compounds of stevia are steviol glycosides (mainly stevioside and rebaudioside), which have up to 300 times the sweetness of saccharose, are heat-stable, pH-stable, and not fermentable. Rebaudioside A has the least bitterness of all the steviol glycosides. To produce rebaudioside A, stevia leaves are dried and subjected to a water extraction process. This crude extract contains about 50% rebaudioside A. The various glycosides are then separated and purified via crystallization techniques, typically using ethanol as solvent.

steviosides have a negligible effect on blood glucose, which makes stevia attractive to people on carbohydrate-controlled diets. Stevia's taste has a slower onset and longer duration than that of sugar, and some of its extracts may have a bitter or licorice-like aftertaste at high concentrations.

we offer Stevia under the following forms :